Would you believe me if I told you that I woke up incredibly sick to my stomach, had to run to the bathroom 10 minutes before the race, was dehydrated and on a brutal race course?

That’s all true and I still shattered my old 5K PR by almost 2 whole minutes.

I got way too little sleep the last 2 nights, so I was genuinely scared when I woke up feeling like I’d been punched in the colon.  We stopped at Starbucks (my old pre-race ritual) so I could get my pick-me-up and then headed downtown an hour before the race so I could pick up my packet (I was too lazy to do it yesterday).

It was kind of hard to find packet pickup because it was inside the finish corral.  The swag bag for this race was seriously boss.  I got a very nice tech t-shirt, a visor, a water bottle, a sample Hammer Fizz tab and a lotion sample.  There was also a Muscle Milk booth handing out entire bottles of Muscle Milk, but I won’t drink that crap.

(And yes, I stand by calling Muscle Milk crap.  For more information on why you shouldn’t drink Muscle Milk, read this article by Consumer Reports.  Those levels of heavy metals are unacceptable to me, especially when I’m TTC.)

Anywhoodle, the race started late (10-15 minutes, I’m not 100% sure), which was irksome, but whatever.  Before the race I met Julie G. for a warm-up run, which really does make a difference.  I think we only did about 5 minutes, but we did a hill loop, which warmed up the calf muscles pretty well. 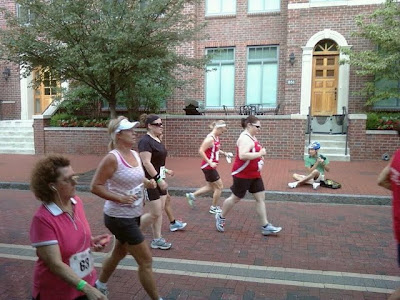 I am mortified that I am so obviously heel striking when I've been going on and on about good form running. I got caught up in trying to slow down and heel striking slows me down a lot.

My first half mile was probably around a 10:30 pace, but it was HOT and I was dehydrated.  Mile 1 was an 11:22, followed by an 11:58 and than a 12:40.  My heart rate continued to soar, especially with all of the steep hills on the course, I really forced myself to slow down on the last mile.  I knew if I kept my pace at or below 12 min/mile overall that I would PR. 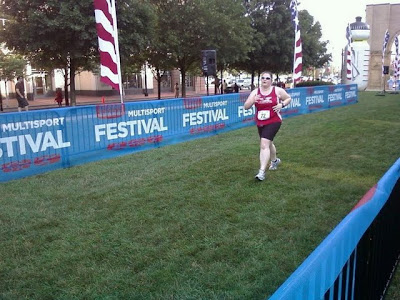 I was totally spent and sprinting like hell to try to be under 37 minutes. According to the clock I failed, but chip timing said otherwise. And I'm effing heel striking again. What is this crap? Whatever, I love this picture, it's the first one where it actually looks like I'm running.

This course also had almost no shade.  Note to race directors: if it’s July, your course needs to be mostly shaded.  However, there were 3 water stops for the 5K, which was perfect for this time of year.  The last was really close to the end, so I skipped it for the sake of time, but it would definitely be necessary for the Olympic triathletes who were doing a second 5K loop.

The finish line on this course was kinda BS.  It wasn’t in the same place as the start, but they left the start line up, so we had to run back through the start, around the corner, up some stairs and then in to the grass.  We watched some dude cheat later in the tri by skipping the curve that was coned off.  Anyways, I started sprinting when I saw the start only to be told I wasn’t done and then I really slowed down out of sheer exhaustion and frustration.  Once I hit the straight path on the grass, though, I ran as fast I could to try to beat the clock, which was about to hit 37 minutes.  I really wanted to break 37, but I wasn’t sure how far after the clock I had started. 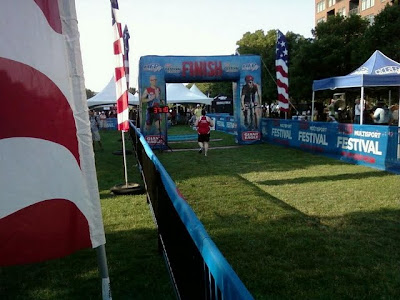 The finish celebration was sweet!  I got my medal (woo!) and then checked out the food.  There was watermelon, bananas, cookies, bars, water, etc.  Definitely the best stocked finish I’ve ever seen.  The first pro Olympic triathlete finished right after me (although a lot or them passed me on the course, which they had to do twice).  The pros scare me because I’m pretty sure they could eat me for breakfast.

Oh yeah, and Captain America and Aquaman were there. 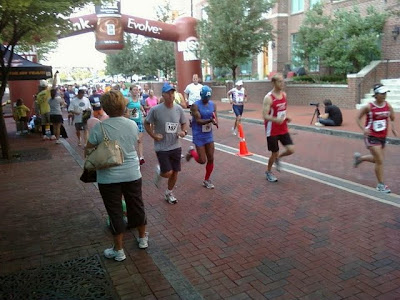 Captain America ran the 5K, but we didn't manage to get one of Aquaman doing the tri.

After the race I hurled my butt in to a chair while catching up with Jenn M.  Some other race clubbers who finished right after us came up and chatted for awhile.  One of them beat me at the first race or two this year, but lately I’ve been beating her.  She came up and told me what a great improvement she’s seen and that I’ve inspired her to push harder.  It MADE MY DAY!  I love how nice and friendly most runners are.

I quickly left even though I wanted to cheer on Keri who was doing the sprint tri.  My stomach was a hot mess and I knew I couldn’t wait another 2 hours before going home.  I’m still feeling pretty under the weather.  And starving.  But awesome. 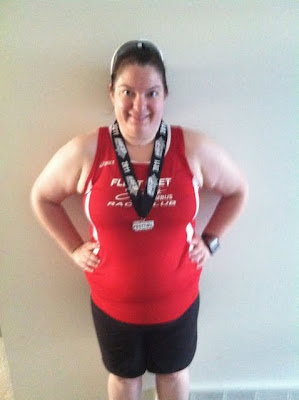 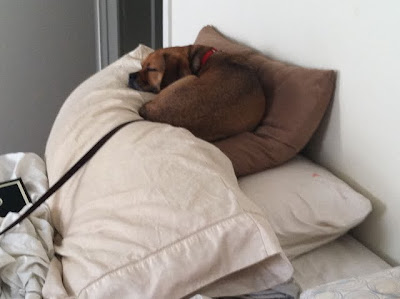 Delilah had the right idea when we got home. And that's fuzz from a stuffed dog toy on the pillow, not blood.

Married 20-something in flux and trying to cope by running and occasionally crafting.
View all posts by Sarah S @RunningOnWords →
This entry was posted in Dogs, Gear, Race Recap, Training. Bookmark the permalink.